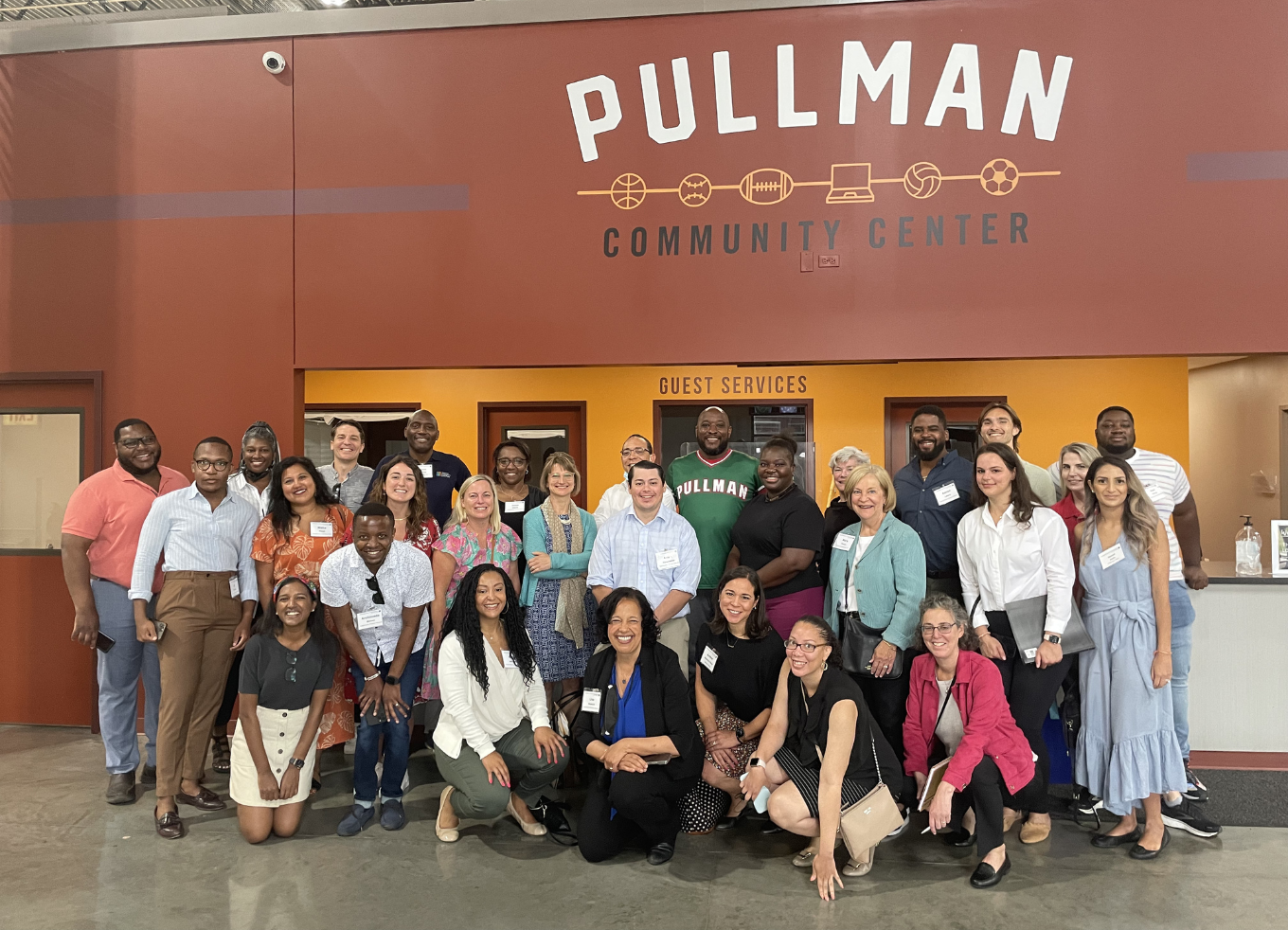 The OFN team recently traveled to Chicago to visit CDFIs in our membership and their borrowers. A few of our partners also joined us and had the opportunity to witness first-hand how their investments in CDFIs generate economic opportunity for people and places that mainstream finance doesn’t traditionally reach.

The day of touring CDFI-funded projects and other local catalytic development ranged from Regal Mile Film Studios, to the Obama Presidential Center opening in 2025, to meeting an ice cream entrepreneur who will be selling her artisan batches at the upcoming Lollapalooza music festival in Chicago.

More highlights from the tour:

Pullman
To kick off the tour, the group stopped at the Pullman Community Center (PCC). Located in the Pullman neighborhood, this 135,000 square foot center offers more area for sports and activities than any other facility in the Chicago area and draws more than 2,000 people a week. The group also toured the Pullman National Monument Visitor Center and received a narrated driving tour of the Pullman Artspace Lofts.

The Pullman Community Center and Pullman Artspace were financed by Chicago Community Loan Fund (CCLF) with Chicago Neighborhood Initiatives (CNI) as the developer.

Woodlawn
Next the group traveled to the Woodlawn neighborhood and drove by existing and planned projects, including Regal Mile Film Studios and Stony Island Arts Bank — both financed by CCLF — as well as Woodlawn Central and the Obama Presidential Center. Along the way, the group also heard from Bill Eager from Preservation of Affordable Housing (POAH). He talked about the projects they have led on Woodlawn’s commercial corridors, including a grocery store, health clinic, mixed income housing, a library, and more.

The group also drove by the Renew Woodlawn superblock and other housing and commercial development projects, where Anthony Simpkins from Neighborhood Housing Services of Chicago (NHS) and Stacie Young from Community Investment Corporation (CIC) talked about the involvement of their organizations in financing these projects.

Bronzeville
Later the group traveled to the Bronzeville Winery to enjoy lunch provided by Catering Out the Box, a full-service catering business started in 2003 by Anthony Waller and supported with financing from Allies for Community Business. During lunch, the group heard from Bronzeville Winery co-owner Cecilia Cuff, as well as Kristen Komara from The Resurrection Project and leaders from nonprofit Quad Communities Development Corporation (QCDC).

While touring Bronzeville, local developer and CIC borrower Marcus Perkins joined the group on the bus to talk about the 10-unit property he rehabbed alongside his wife Tracey Hughes, which includes housing for those with criminal records. The group also drove by the Bronzeville Lakefront, a 100+ acre, multi-billion redevelopment of a former hospital that includes CNI as a member of the development team and CCLF and the MacArthur Foundation as predevelopment lenders.

Garfield Park
Finally the group finished the day with a reception at The Hatchery, a joint venture between Allies for Community Business and Industrial Council of Nearwest Chicago (ICNC) that includes more than 50 commercial kitchens for local entrepreneurs. Maison Cuisine, an eco-conscious, full-service catering and event planning company and one of the first tenants in The Hatchery, provided catering. Ida’s Artisan Ice Cream owner Ida Nelson also shared her inspiring story, and her delectable ice cream!

Learn more about the amazing small businesses, affordable housing developments, community facilities, and other CDFI-funded projects we visited! You can also check out our Facebook album for more photos from the trip.

Special thanks to all those who helped make this Chicago CDFI impact tour a success! We look forward to joining more OFN members and partners around the country this year as we continue our work to finance justice and change.